3.5 The history of earth’s atmosphere

During the Cambrian period, about 500 million years ago, CO2 in the atmosphere was as high as 4,000 parts per million (ppm). Then the carbon cycle of life on earth started to take off and absorb most of this CO2. According to studies earth’s climate system maintained a fluctuating balance between 400/ 180 and 280 ppm over the past four million years. Since the start of the Industrial Revolution the global annual greenhouse gases concentrations, mainly mean CO2 has increased by more than 45%, from 280 ppm during the 10,000 years up to the mid-18th century to over 400 ppm in 2019. In April 2020 the daily amount of CO2 in the atmosphere even reached 416 ppm! This present concentration might be the highest since more than 14 million years ago! The increase has been attributed to current human activity, particularly deforestation and the burning of fossil fuels that took millions of years to store into earth’s crust, combined with the longevity of previously emitted greenhouse gases. This higher than usual amount of greenhouse gases in the atmosphere contributes to the current episode of global warming.

3.6 Carbon dioxide as a greenhouse gas

Although part of the CO2 from fossil fuels is extracted from the atmosphere by the oceans and terrestrial biosphere, the story of how and why this happens is the subject of much scientific research. Understanding when, where, and why this happens, is key to answering the questions about climate change. First it is important to understand that most sources of CO2 emissions are natural and are balanced to various degrees by natural CO2 sinks. Another word to describe natural sinks is to call them sponges that can absorb, but also release CO2. Those natural sinks include the plants and oceans described in the carbon circle of life. 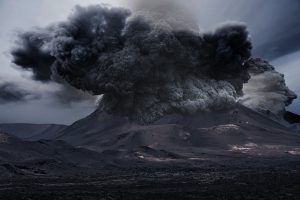 The initial carbon dioxide in the atmosphere of the young earth was produced by volcanic activity. However modern volcanic activity contributes much less to earth’s climate circle. It is estimated that volcanic activity currently releases only between 150 and 260 megaton of carbon dioxide each year. This while the total natural emission of CO2 is estimated at around 771 gigatonne of carbon dioxide every year. This CO2 emission is produced by earth’s near-surface environment. Plants and animals on the mainland contribute to about 439 gigatonne of CO2 emission, while oceans are responsible for the release of around 332 GtCO2 per year. Note: 1 megaton is 1, 000,000 metric tons and 1 gigatonne (or billion ton) is 1,000,000,000 metric tons.

No worries, earth is also capable of re-absorbing around 788 GtCO2 a year, which is 17 GtCO2 more than it releases. This number comes from the estimation that the photosynthesis of land plants absorbs about 450 GtCO2 from the atmosphere, while earth’s oceans can absorb about 338 GtCO2 per year. The exact amounts depend on temperature (amount of limestone-producing organisms) and rates of photosynthesis by phytoplankton.

3.7 What are greenhouse gases? 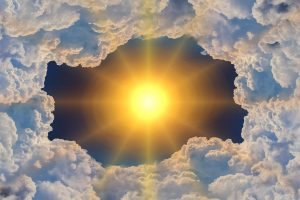 • Carbon dioxide (CO2)
We already saw how the carbon cycle functions. However it’s important to understand that it can stay up to more than 100 years in the atmosphere, where it influences the radiation effects of the sun. This means that all CO2 that is released today can still have an influence on earth’s climate in 2100 unless we extract it from the air!

• Methane (CH4)
On average, each molecule of methane remains in the atmosphere for 9 years, a much shorter lifetime than CO2 remains in the atmosphere and oceans. This is because it is destroyed by a chemical reaction in the atmosphere with hydroxyl radical. Even though the concentration of methane (about 1.8 ppm) is small compared to CO2, it is about 28 times more powerful than carbon dioxide at warming the earth, on a 100-year timescale, and more than 80 times more powerful over 20 years. About 20 percent of the extra warming our planet experiences can be attributed to methane. The main natural sources of methane include wetlands, termites, and oceans. Human sources of methane emission include landfills, livestock farming, production, transportation, and other use of fossil fuels. Natural sources currently create only 36% of the methane emissions, while the human-related sources account for around 64%! Increasing temperatures might cause the release of methane stored in permafrost having a dramatic influence on our climate.

• Nitrous Oxide (N2O)
Next time you’re at the dentist, take a moment to think about nitrous oxide, better known as laughing gas. Believe it or not, nitrous oxide is also a powerful greenhouse gas! Though its concentration at 0.32 ppm is much smaller than CO2 and methane, it is 200 times more powerful than CO2 if the same amount of gas was released at the same time nitrous oxide has a long lifetime of 120 years. This means that on average, nitrous oxide that is released stays in the atmosphere for longer than we are alive. The primary source of human nitrous oxide emissions is fertilizer used to help crops grow in the agriculture industry.

• Sulfur Hexafluoride (SF6)
Sulfur hexafluoride is entirely manmade, and used mostly to stop sparks (preventing fires) inside transformers and other electrical equipment in the electric power industry (inclusive wind turbines and hydro generators). Over time, it leaks into the atmosphere. Current concentrations of sulfur hexafluoride in the atmosphere are small, but it has a lifetime of 3,000 years, and per kilogram, it is between 23.000 and 36,000 times more powerful than CO2 as a greenhouse gas!! Sulfur hexafluoride does not have a natural sink, due to its inert properties.

The primary source of carbon monoxide is combustion, but some of it is produced by the oxidation of volatile organic compounds. The majority of volatile organic compounds are created by plants, still a small portion is also created by industrial processes. Have you ever noticed the yellow flame when you burn wood in a fireplace? A yellow flame means that the burning is inefficient and produces lots of soot and carbon monoxide. On the other hand, when you run a gas barbeque you see a hotter, more efficient, blue flame which produces very little of i. A natural source, like a forest fire, is inefficient and produces relatively large amounts. Large electrical power plants that burn coal and natural gas are very efficient, and they produce almost no carbon monoxide. Cars and other vehicles are less efficient and produce an intermediate amount of this greenhouse gas (smog). Carbon monoxide is poisonous. When the concentration goes over about 35 ppm, it can kill us.

• Hydrogen gas (H2)
This gas is not a direct greenhouse gas, but like carbon monoxide it reacts with the hydroxyl radical in the atmosphere, and therefore decreases the effectiveness of the methane sink. Concerns over hydrogen gas are now shifting towards the future. Even with discussions of hydrogen power supplies, leaks in production and transport will still exist. Therefore it is important to understand how hydrogen interacts in the atmosphere and what increasing hydrogen amounts could do to other gases such as methane.

• Water (H2O)
In the form of vapor, water is the most abundant greenhouse gas in the atmosphere. Changes in its concentration are considered to be a result of climate feedback related to the warming of the atmosphere rather than a direct result of industrialization. The feedback loop in which water is involved is critically important to projecting future climate change, but as yet is still fairly poorly measured and understood. As the temperature of the atmosphere rises, more water is evaporated from ground storage (rivers, oceans, reservoirs, soil). Warmer air increases the humidity (in essence, the air can ‘hold’ more water when it’s warmer), leading to more water vapor in the atmosphere. As a greenhouse gas, the higher concentration of water vapor is able to absorb more thermal infrared energy radiated from the earth, thus further warming the atmosphere. The warmer atmosphere can again hold more water vapor and so on and so on. This is referred to as a ‘positive feedback loop’.

Large scientific uncertainty exists in defining the extent and importance of this feedback loop. As water vapor increases in the atmosphere, more of it will eventually condense into clouds. Those clouds can reflect incoming solar radiation, thus allowing less energy to reach the earth’s surface in the first place. This could even result in a cooling down effect. Prof Palmer from the British Meteorology Office says: “If warmer weather leads to more low-level clouds, they will bounce out radiation and cool the earth. If it leads to more high-level clouds, they will trap in heat“. Future monitoring of atmospheric processes involving water vapor will be critical to fully understand the feedbacks in the climate system leading to global climate change.